When I arrived in Paris, I was greeted by an elderly French man named Dominique whom my parents had met on a bus trip in Patagonia. I know that is a lot of information, but I do not want to bore you with too much family backstory. Nevertheless, this was the man I would stay with for the following week while I toured Paris. The last time I had seen him was around 9 or 10 years ago, so there was a lot of catching up to do. We left Paris De Gaulle Airport and headed to a southern suburb of Paris called Meudon La Foret. When we entered his building, we had to take the elevator up to the fifth floor. I was surprised by the size of the elevator because it’s capacity was four people, but Dominique and I were belly to belly going all the way up. 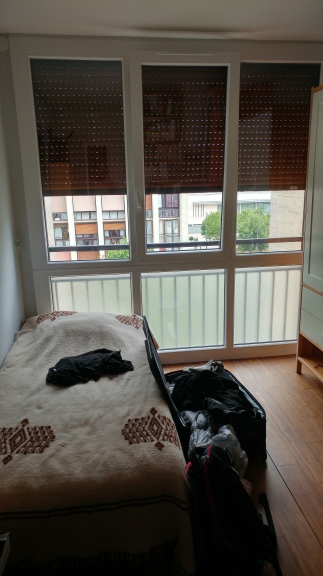 This was the room I stayed in while I was in Paris. I came to realize that people pay an exorbitant amount just to live in the vicinity of Paris. This was a surprising contrast from growing up in the U.S. But that could also just be my lack of knowledge about living in cities in general. It was also amazing to eat French food, especially the bread, which I had every morning when I woke up.

In the evenings, Dominique and I would walk ten minutes to have supper with his ‘polola’, Debora, who would prepare very traditional French meals. It usually consisted of bread, fruit, fish, meats, and other assortments of appetizers. Because she knew hardly any English, our conversations consisted of Dominique translating from English to French and vise versa. I also ate way too much because when I said the food was good, then Debora assumed I wanted more. And if I said “no mas, gracias” and shook my head, she assumed I did not like it. So, this always led to amusing, awkward situations.

Now it is always reassuring when you are living with someone who speaks English, but my next daunting test was getting into Paris. From Meudon, I would have to take a tram and then change over to the metro to get into the city. The commute, as I would come to realize quite quickly, was around an hour and a half. Fortunately, Dominique was very helpful and drew out a map of what tram and metro line I had to take. The next morning I packed my travel bag and I jumped on the tram. When I arrived at the metro station, this was the map I was looking at…

Now for someone who has never navigated a city metro system before, I took a deep breath and tried to understand the anatomy of this city system. When I looked down at the map Dominique had drawn me, and then back at this map, I was so confused! I literally spent 20 or 30 minutes thinking about getting on one of the overland trains. I looked each direction, not knowing which way Paris was, and just hoped for the best. Luckily, I went in the right direction. After a few more days of using public transport this confusing map with unpronounceable names became more understandable. Overcoming the complexities of the transport system allowed me to experience…

The Palace of Versailles

Family at the Eiffel Tower

Overall, my trip to Paris was fantastic. Because I only had five days to explore the city, I was amazed by what I saw and experienced. The people I met were incredibly friendly, and spending times with Oscar and Ophilie and Dominique and Debora made the trip even better. And because I was staying so far from the center of Paris, I got to experience the daily commute that locals make to get to the city.