Goodness me, it has been over two weeks since I wrote my last blog post. I didn’t realize how busy I was going to get, so I apologize for not posting weekly. In any case, I’m going to attempt to retell what I did over these past two weeks…

Where are we? Well, it’s a sunny morning in Tarnby and I’ve just rolled out of bed. I’d planned to meet some friends at the beach, but the weather outside told me that it wasn’t the right day for that. But then I remembered, this might be one of the few chances I’ll get to swim in the ocean. So, without giving it too much thought, I was on the bike with my beach towel tied on the back. The wind was relentless, which made the journey much more difficult! I rode all the way to Amager Strandpark, which is a popular beach on the island. The temperature wasn’t ideal, but I didn’t care!

Now, I’m not one for jumping into freezing cold water, but it was actually very nice. I’m sure that this beach would be lovely on a calm sunny day, but I’ve come to realize that those days are rare in Denmark, especially now that it’s late September. I spent the rest of the day chatting with friends and finally made my way home to get ready for the wild evening ahead.

I can’t remember if I explained the 18th birthday celebration in Denmark. For weeks leading up to my host sister’s birthday, the parents had been planning the event. I honestly thought they were planning a wedding because there was going to be a catering service providing food, an open bar, and different rented games. On top of this, 70 people were scheduled to show up. I didn’t know what to expect, but it ended up being the best birthday party I’ve ever been to! The food was fantastic and at roughly 11 pm, half the room turned into a college-style party and the other half remained a birthday party. Everyone embraced hygge! I ended up leaving the party at around 1 and my host family and their friends kept partying until 4 am. It was a night (and a morning) I will never forget.

The following week was my first study-tour. In the first half of the week, we went on a bike tour and visited different memorials dedicated to the resistance fighters who fought against the German occupation in Denmark during WWII. We also listened to lectures given by a sociologist about the Danish minority in South Slesvig and by historian Therkel Straede about Danish perpetrators. 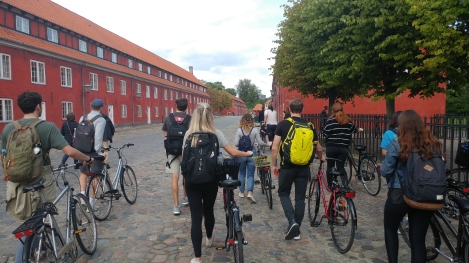 On our bike tour to one of the memorials.

In the second half of the week, we packed our bags and got on the bus for our short trip to Flensborg and Sonderborg. Both of these cities lie on the German-Danish border and played significant roles in German and Danish history. During WWII, Flensborg was where the last Nazi officials fled to after Hitler had killed himself. 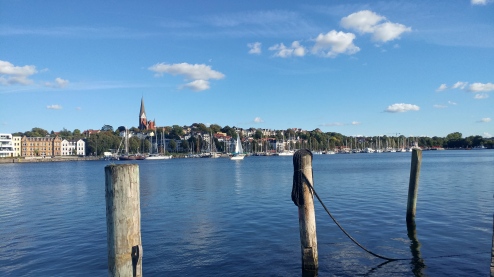 The beautiful city of Flensborg

In between out visits to these two cities, we also visited the Froslev Internment Camp, which is where Danish resistance fighters were imprisoned during the German occupation. After the war, however, Nazi officials were imprisoned and many of the guards were former prisoners. The director of the museum, Henrik Skov Kristensen, spoke to us about the opposing perspectives Germans and Danes have about the camp. It was fascinating to visit a location that I had only heard about in textbooks.

A few minutes outside of Sonderborg was the location of the famous Battle of Dybbol in 1864. The battle was between Denmark and Prussia and resulted in Denmark’s defeat. This would redefine borders and tie into 20th-century disputes and conflicts over border regions between Denmark and Germany.

The Battle of Dybbol memorial.

This was such a memorable experience. It was awesome to spend quality time with the professor outside of the classroom and listen to his perspectives and approaches to Danish and German history (as he is a part of the German minority). As a history major, I picked this study abroad program because I wanted this kind of exposure to historical sites and how they’re remembered. It was an invaluable experience.

The following Tuesday (this past week), we had our hygge dinner with our homestay network. We all decided to make tacos and spent the afternoon and evening talking about our experiences, life, and whats’ coming up next in our lives. I was so glad that our homestay network had made such a great effort to remain connected so that we could schedule special nights like this.

On Wednesday, I had my first field study with my podcasting class. We visited the media company DR on Amager and took a tour of the facilities. Our professor took us to the radio broadcasting room where he had worked as a DJ for 8 years before he became a teacher. We also met Torben Brandt, a creator of radio production, who told us about how he fell in love with the field. He then asked if anyone would like to be interviewed. I half-raised my hand out of excitement and was picked. So, there I was, telling a story about how I got lost in Walmart when I was 8… sitting next to Torben, who had his microphone so close to my face that I couldn’t keep my eye off of it. It was a bizarre experience, to say the least.

And that wraps up my adventures in the past two weeks. I could’ve added a lot more depth to these stories, but I think that would require me to write a few books on all of my experiences.

One thought on “DANMARK WEEK #5”